In the swim with bananas and chocolate 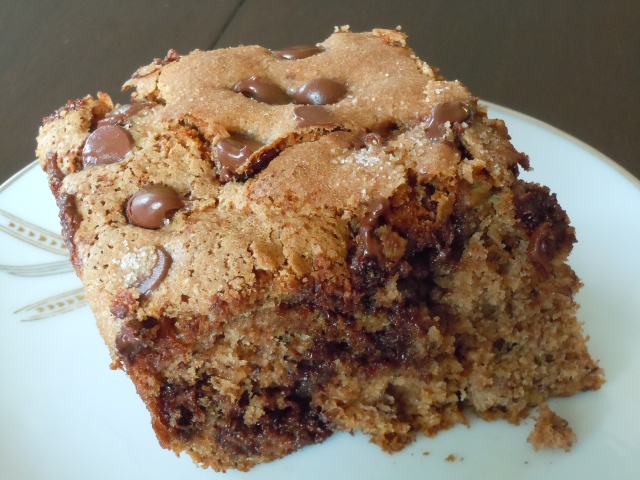 Since we seem to have gone from early spring straight into steamy summer, Tom decided it was time to introduce our dogs to our best real estate asset: the river in our backyard. After all, Libby’s half Lab and Cleo has webbed paws. We figured that with their innate natural abilities and the stifling heat, this was a no-brainer.

The girls were less than enthused.

We took Libby first, assuming that she’d jump at the chance (pun intended) to get in that lovely cool water. We might as well have asked her to jump out of an airplane. She was horrified.

We brought Cleo down, thinking that Miss Alpha Bossypants might just show Libby what fun swimming really was. Not a chance.

Although the river is fairly shallow at the shore, there is a bit of a drop-off. Luke had the brilliant idea to add a makeshift ramp. Tom stood in the water and persuaded, Luke nonchalantly dragged Libs down the ramp, and I encouraged Cleo to explore the shore.

With patience and lots of encouragement, Cleo dunked her head and front paws, and our brave Libby plunged right in. And right back out again, but still. We were thrilled, and the girls were pretty pleased too.

I’ve been trying to connect this with my planned recipe for banana-chocolate chip cake. Here’s all that I can come up with: This cake, although sweet, decadent and contains chocolate, is actually healthy, in a dessert kind of way. It has no fat other than what’s in the eggs and chocolate, and I’ve added a bit of whole wheat flour. So, maybe it’s a good treat for bathing suit season? Does that work? Anyway, it’s guiltlessly luscious. Chocolate and bananas are a time-tested combo, and the little bit of sugar on the top adds a delicate crunch.

I found this cake on Orangette’s blog; she adapted it from Everybody Likes Sandwiches; actually, the links (and versions) of this cake go on forever. I substituted wheat flour for 1/4 cup of the AP flour, and lessened the sugar by just a tad, since overripe bananas are incredibly sweet already. You’d think that 2 whole teaspoons of cinnamon would be overwhelming, but it’s surprisingly subtle. The original cake is made in a 9-inch-square pan, but with my balky oven, the edges were a bit dry by the time the center cooked, so I went up one pan size.

The whole thing goes together in minutes, even faster if you skip my changes and just go with all AP flour and all white sugar. Once, when someone had absconded with the chocolate chips (you know who you are!) and I had a serious craving for this cake, I chopped up the two chocolate bars I had in the house (dark with chilis, semisweet with sea salt) and it was still fabulous.

In a large bowl, mash the bananas. (I just beat them for a moment with electric mixer on low.) Beat in the eggs, then the sugars and vanilla. Stir in the flour mixture just until combined, then add the chocolate chips. Pour the batter into the prepared bowl, sprinkle with the extra chocolate and then with the cinnamon-sugar. Bake for about 30 minutes until a toothpick inserted in the center comes out with moist crumbs and gooey chocolate clinging to it. It’ll be delicious for a good three days, if you can resist that long.

I am a freelance editor with a specialty in cookbook editing. I've written two small cookbooks (50 Best Sundaes and 50 Best Cookies) and have edited more than 200. Despite my immersion in recipes, my favorite way to cook is to see what's in the fridge and wing it. I live with my husband and two dogs in rural Wisconsin. Husband (Tom) and son (Luke) are talented cooks themselves. All the photographs in this blog are my own creations. I'm a neophyte in the world of food photography (as if you couldn't tell), but I still claim blushing ownership of the pix you see here. If you want to reprint them (I can't imagine why), please give credit, if for no other reason than to pass on the blame.
View all posts by Rivertree kitchen →
This entry was posted in baked goods, sweet stuff and tagged banana, cake, chocolate, healthy, low-fat. Bookmark the permalink.

3 Responses to In the swim with bananas and chocolate