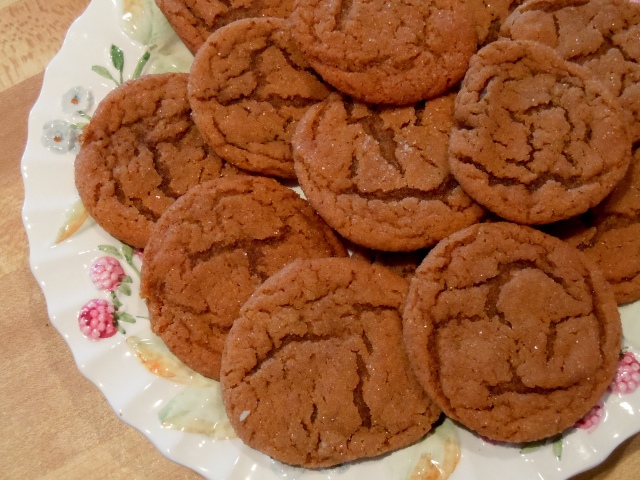 I brought these cookies to my son’s piano recital several years ago. People would look at these humble brown circles doubtfully: What were they? Too light to be chocolate, too dark for peanut butter. But then an intrepid soul picked up a cookie and took a bite. One beatific smile was all it took—the cookies were gone in five minutes.

These modest, unassuming discs hide a secret: they are packed with explosive flavor. Molasses, brown sugar, a touch of butter, and layers of spices combine in a way that’s rich, deep and complex.

As far as I can figure, this recipe originally came from my grandmother. My mom has made them her whole adult life, as have I. The recipe has morphed over the years (big surprise there; since when do I leave a recipe alone?).

That time I made them for the piano recital? I’d forgotten that I was supposed to bring treats until an hour before the recital. Oops! I made these because A. they’re my favorite cookies, hands down; B. the dough doesn’t need refrigerating; and C. I had the ingredients—or so I thought. My mother always made molasses cookies with shortening. I had exactly 1/3 cup of Crisco in the house, not even enough for a half-batch. I filled the gap with softened butter. Amazing! They were even better.

So of course, the next time I tried making them with all butter. Not so much. The butter battled with the spices. Back to half butter, half shortening, and that’s where we stay.

My mom rolls the little balls of dough in sugar before baking. I tried using demerera sugar (Sugar in the Raw), thinking it would add extra crunch. All it did was melt into an odd-textured shell. Back to plain white sugar, but now I add a small amount of the same spices I use in the dough.

Sometimes I stick to the traditional mix of cinnamon, cloves, ginger and nutmeg, usually with a sneaky few grinds of black pepper. Sometimes I’ll add about ¼ teaspoon of coriander, cardamom, Chinese five-spice, vindaloo or other sweet-savory spice blends. They’re all good. I haven’t tried adding chile powder yet, since the ginger and black pepper add heat, but it would be fun to experiment with a tiny pinch of cayenne.

It’s highly possible the original cookie was only sweetened with white sugar and molasses. I use white and brown sugars in addition to the very necessary molasses.

Try them as a spicy sidekick to a dish of ice cream, individual chocolate mousses (future post!), or strawberry granita (also future post!); top them with a dollop of Nutella or bitter orange marmalade; make little sandwiches with cream cheese frosting. Or just savor their complex flavors all on their own.

Heat the oven to 400°F. Line a cookie sheet with parchment.

In a small bowl, stir together the flour, baking soda, salt and spices.

Dump the brown and white sugars in a big mixing bowl. Fill a ¾-cup measuring cup half with softened butter and half with shortening for a total of ¾ cup fat. (I use Pampered Chef’s adjustable measuring cup set on ¾ cup.) Scrape the butter-shortening into the bowl with the sugars. Beat this mixture with a mixer for a few minutes until it’s fluffy and there aren’t any lumps of sugar. Beat in the egg, then the molasses. (If you used the adjustable measuring cup for the fats, re-set the cup to ¼ cup and use it to measure the molasses; every drop of that sticky molasses will slide right out of the still-greasy measuring cup.)

Stir in dry ingredients just until they’re completely incorporated—don’t overbeat. In a small bowl, mix the rolling sugar with the spices.

Roll rounded teaspoons of the dough into balls, then roll the balls in the rolling sugar. (Yes, this is a sticky, messy job. Art calls for sacrifice, people.) Place the sugared balls about 2 inches apart on the cookie sheet; they will spread as they cook. Bake for about 7 minutes, until there are cracks on the top but they look like they could use 1 more minute. Let the cookies cool on the sheet for 2 to 3 minutes, then move the cookies to a rack to cool completely.

This recipe makes about 5 dozen cookies. They will keep for several days at room temperature in a tightly covered container, but only if you hide them away.

I am a freelance editor with a specialty in cookbook editing. I've written two small cookbooks (50 Best Sundaes and 50 Best Cookies) and have edited more than 200. Despite my immersion in recipes, my favorite way to cook is to see what's in the fridge and wing it. I live with my husband and two dogs in rural Wisconsin. Husband (Tom) and son (Luke) are talented cooks themselves. All the photographs in this blog are my own creations. I'm a neophyte in the world of food photography (as if you couldn't tell), but I still claim blushing ownership of the pix you see here. If you want to reprint them (I can't imagine why), please give credit, if for no other reason than to pass on the blame.
View all posts by Rivertree kitchen →
This entry was posted in baked goods, sweet stuff and tagged cinnamon, cookie, molasses, spice. Bookmark the permalink.